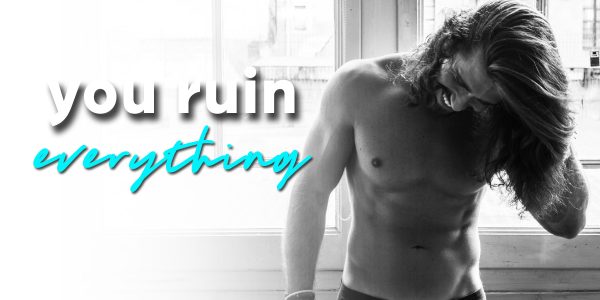 UNEDITED Excerpt of You Ruin Everything
© 2022 M. Malone
CHARLOTTE
Have you ever watched a horror movie and thought to yourself, no one is this dumb in real life?
It’s usually the blonde co-ed investigating the weird noise in the basement, or the jock who runs into the creepy woods to escape instead of toward town. Whatever the case, the solution seems so obvious and yet no one on screen seems to see what’s right in front of their faces.
As I watched the water level in the bathtub continue to rise, I had the sobering thought that I might actually be the too-stupid-to-live heroine in this particular horror movie.
“What do I do?”
Cursing myself for not doing it sooner, I ran into the kitchen and pulled open all the lower cabinets until I found a plastic bucket. I carried it back into the bathroom and started scooping water out of the tub and into the sink.
I heard something faintly but didn’t have time to stop and find out what it was until another resounding boom went through the house.
Was that someone at the door?
With one last pained look at the almost overflowing tub, I ran into the living room. With any luck it would be one of the neighbors coming by. Hopefully it was someone who wasn’t as clueless as I was about how to fix a broken faucet.
The perpetual nosiness of the neighbors was one of my mom’s favorite things to complain about whenever she was forced to return to her hometown but I had always thought it was nice. Was it really the worst thing in the world to be surrounded by people who cared about you?
Instead when I flung the door open I realized that I hadn’t been that lucky. No I didn’t get a visit from a kind neighbor who cared about me.
I got Hendrix Evers.
The one person in the world who’d hated me on sight.
“You’re the one looking for a roommate?” he glared at me with barely concealed annoyance.
“I am going to kill Santana,” I grumbled. I left him standing there as I ran back into the bathroom. The water level had risen considerably just in the thirty seconds I’d been gone so I resumed my frantic bucket diving, tossing the water in the bathroom sink.
“Holy shit. What the hell happened in here?”
I turned around to see Hendrix had followed me into the bathroom, his six foot something frame making the room seem even smaller. Had he always been this much taller than me? I didn’t remember him being this big in high school other than his big fat head.
“What does it look like happened? The tub is broken!”
He pushed me aside and started pulling on the knobs. I almost strained a muscle rolling my eyes. Did he seriously think I hadn’t already tried that?
Maybe he thought having a penis would make all the difference.
“I don’t need your help. I have it under control.”
He cupped his hands under the faucet and directed the stream of water upward to splash me right in the face. My shriek was short-lived as more water went into my mouth and streamed down the front of my shirt.
“Oh my god. Would you get out!”
He left and I was shocked that he actually listened to me. But I quickly got back to work bailing water into the sink again. My arms were already burning from the effort.

There was no way I could keep this up. I would have to leave long enough to call a plumber and in that time the whole bathroom would be flooded. Maybe I shouldn’t have told Rix to leave.

I should have told him to use the bucket while I called for help.

Maybe it was the exhaustion or the sudden appearance of my nemesis on the front porch but tears flooded my eyes. This whole trip was one giant fail. After everything fell apart in New York, it had seemed like a lifeline to realize that we still had a place to live, a place that no one could touch.

But so far my plan was a complete bust. I was supposed to be getting the house ready so my mom and sister would have a safe place to hide out from the craziness. It was only my second day in town and I’d already ruined one room of the house.

After a few minutes the water suddenly slowed to a trickle and then stopped completely.Panting, I pushed soggy hair out of my face. I looked around in confusion. Hendrix appeared in the doorway again.

“Why didn’t you just turn off the main water valve?” he asked finally.

My face flushed before I turned back to the tub. I didn’t want to admit that I hadn’t known to do that. No one told me about a water valve. I wasn’t exactly Bob the Builder so why the hell would I know any of this?

If he noticed my deflection, thankfully he didn’t comment.

“Tana told me you had a room to rent? She knows I’ve been looking for a place.”

I was a little skeptical that Tana would send him here knowing how much we’d always hated each other. She knows Rix is the last person I would ever want to live with. Tana wouldn’t have lived with him either if she’d had a choice growing up. Not only was Hendrix a pain in the ass but he was also a complete slob. Think sporting equipment and free weights everywhere you could trip on them with the glorious edition of socks with an odor so strong they could be used as general anesthesia.

I doubted he’d improved much over the years. That was probably why he needed to find a new place. His current roommate probably couldn’t deal with him either.

“What’s wrong with where you’re living right now? Did you get kicked out?”

He shrugged. “The owners sold the place. I’m living with my brother right now.”

I smiled at the thought of Van Halen. His older brother was flirtatious and charming, basically everything the surly Hendrix was not.

“That’s not working out?”

“It’s great. Until he’s banging his girlfriend in the next room. Which is why I really need to move out.”

I laughed. “Good luck with that.”

“Look, I know we haven’t exactly been friends in a while–“

“Ever. We haven’t been friends ever,” I interrupted.

“–but surely we can coexist in the same place for a few months. Tana said it’s just for the summer. That’s perfect. It’ll give me the time I need to find a place I want to buy.”

As I walked out of the bathroom, I held my sopping wet shirt away from my skin. The last thing I wanted to do was keep wearing a gross shirt but there was no point in changing until I’d mopped up all the water from the bathroom. Gran Grace had always kept cleaning supplies in the small closet off the kitchen so I could only hope her old mop was still there. I opened the door.

I grabbed the mop, thankful it was one of those old rag ones that lasted forever. If I got all the water up quickly it wouldn’t do permanent damage to the floors, right? Bathroom floors were made to get wet, after all.

Maybe this wouldn’t be as big of a problem as I’d thought. I called on my PhD in HGTV to mentally calculate how much it would cost if I was wrong about the bathroom floor. Having to replace the subfloor would be expensive, adding thousands to my bathroom renovation budget.

Startled, I whirled around. I was so consumed by my thoughts I hadn’t realized Rix had followed right on my heels. I didn’t like the idea of him sneaking around behind me. Despite being an adult (allegedly) I didn’t trust him not to give me a wedgie or put something in my hair.

“What’s the big deal? Seriously? We hate each other.”

“Hate is a strong word.”

Rix shrank back when I whirled in his direction, the mop held in front of me like a sword.

“You stole my clothes while we were at the creek. Everybody saw my boobs!”

“The clothes thing was dumb. I shouldn’t have done that. But that’s all in the past.”

As if he wasn’t even talking, I poked him in the chest with the mop handle while listing his many sins. “You told your mom I dropped that pie at Christmas when you are the one who tripped me.”

He snickered but then shrank back when I glared at him.

“Then you told everyone that I smelled like yogurt.”

He winced at the reminder. “Well–”

“You ruined my prom!”

With that last sobering fact, I walked back to the living room. At least he’d remembered to close the front door so I wouldn’t have a house full of flies. I stopped with my hand on the front door knob.

“Thanks for stopping by.”

He sighed. “This is my only option. Otherwise I’ll end up sleeping in my car.”

“Why would you sleep in your car?”

“Anything is better than seeing Van’s naked ass cheeks again.”

A laugh escaped before I could stop it which only pissed me off more. I didn’t want to laugh at his stupid jokes or notice how strong his jawline was. His dirty blond hair shouldn’t fascinate me and I definitely shouldn’t care whether he’d have to sleep in his car.

When I didn’t say anything else, he finally got the hint. His shoulders slumped but when I opened the front door, he walked out.

I was tempted to just slam the door behind me but then I remembered he’d saved my bathroom by turning off the water. As much as I hated the idea of owing Rix for anything, I couldn’t deny the fact that he had helped. If the situation had been reversed, I might not have been so quick to end his misery.

“Thank you for turning the water off,” I finally said.

He acknowledged that with a wave over his shoulder as he skipped down the steps. Right before he reached the driveway, he turned around.

I looked down. Of course today I would be wearing a black lace bra beneath my white shirt. My wet white t-shirt.

-Thanks for reading the First Look excerpt for YOU RUIN EVERYTHING. Stay tuned for more information about the book, cover reveal, and release date!