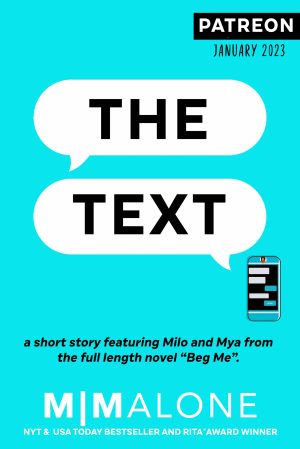 I adore my wife. We’re a perfect match. Maybe that’s why I’m so surprised to see “the text”.

Don’t judge me. You’d read your wife’s messages too if she was texting a guy who looks like The Rock.

Who the hell is this guy? And exactly what does he think he can give my wife that I can’t?

** The Text is available now! Subscribe with the same email you use on BookFunnel and the monthly new releases will show up in your account automatically!

**INTRODUCTORY OFFER** The first Special Edition is available now! This 4-book Mess with Me series contains enhanced versions of Beg Me, Ask Me, Want Me and Need Me. Everyone who joins gets the bundle! (and also the Nov and Dec monthly shorts shown below.)

Get the 4-book Bundle!

Hi! I’m M. Malone (aka Minx Malone), NYT & USA TODAY Bestselling and RITA Award winning author of romantic comedy. I’m a member of Romance Writers of America’s Hall of Fame and my books have sold over a million copies.

That sounds kind of impressive but really I’m just a writer who loves leggings and dreaming up all the hilarious ways falling in love can go wrong. I’m also the mom of two teen boys and wrangler of the world’s nosiest husband.

My Patreon community is an exclusive peek into how my mind works (fair warning, it’s a mess in here!) and a chance to read all my creations before anyone else. You’ll ride along with me as I write my next novel and also get exclusive goodies written just for my Minions such as short stories, bonus scenes, outtakes and more.

Welcome to the dark side. I’m thrilled you’re here 🙂

It’s our first Thanksgiving on our own and I’ve already decided it will be the best one ever. Maybe I don’t know how to cook a turkey but that’s what Youtube is for, right? Eat your heart out, Martha frickin’ Stewart.

Too bad everything seems to be going wrong.

Nothing is going to ruin this holiday for me, not my disinterested parents, Mya’s obsession with work or the absolute jerk at the grocery store who thinks he can just steal my turkey. I’m not afraid to fight for what I want.

That includes the 14 pound bird that belongs on my table.

Deck the halls with the perfect outfit!

I’m organizing a holiday campaign for a major client and just found the perfect outfit to wear for the presentation. I even baked cupcakes for the entire office. Flirting with the hot new guy at work has gotten me in the holiday spirit. Is it coincidence that he shows up in the break room at the same time I do so often? I never thought I’d date a coworker but maybe a holiday office romance is brewing…

Until he suddenly goes as cold as the snow outside.

Now his office door stays closed and there are no more flirty messages. No more warm smiles. What’s a girl to do? I thought I looked great in my new dress but maybe my Christmas cakes are too much for him to handle! 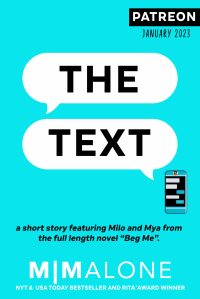 Excerpt of “The Text”

People love to describe marriage like a prison sentence.

The ole’ ball and chain.

It’s no wonder so many relationships fail. They’re doomed from the start.

But in my experience being married has been like the world’s longest sleepover with an extremely hot friend. I’m not proud to admit it but for a long time I was waiting for something to go wrong. I figured Mya would start doing something gross to turn me off, like clipping her toenails in bed or chewing with her mouth open. But it’s been over a year and she’s still the same smart, funny ball-busting bundle that has kept me on my toes since the day we met.

Maybe that’s why it’s such a surprise when I see “the text”.

It’s a Saturday morning and we are doing the same thing we do every weekend. I’m in bed scrolling social media while Mya snores away next to me. I don’t think anything of it when her phone alarm goes off. We’re both busy people juggling multiple demanding ad accounts at work. Having your phone glued to your side is part of the job and we live and die by appointments and alarms. But despite the alarm blaring right next to her ear, Mya doesn’t stir.

“Babe, wake up.” I kiss the bare shoulder exposed by the blanket and chuckle when she yanks it over her head.

The alarm is still going so I reach over her to shut it off. That’s when a message comes through and I accidentally click it.

Now, I would normally never read my wife’s messages but it’s literally right in front of my face. Come on, what would you do?

I don’t think anyone would be able to resist scrolling up if their wife was messaging a guy with a profile picture that looks vaguely like The Rock’s more handsome brother.

So I scroll up and see that Mya has been messaging him since last week.

** The Text is available now! Subscribe with the same email you use on BookFunnel and the monthly new releases will show up in your account automatically!